Defamation (Criminal Code Art. 373): is defined as communicating false information about another person that can seriously damage the person’s reputation among fellow citizens, the person’s career, business, and/or family relations, or cause the person serious harm. The punishment is imprisonment for up to two years.

If the act of defamation causes substantial damage, the maximum prison term is increased to five years. If the act causes large-scale damage, loss of employment, or divorce, the offender faces three to eight years in prison.

It should also be noted that Art. 423 of the Slovak Criminal Code prohibits defamation of a “nation, its language or any race or ethnic group” in addition to “a group of persons or an individual due to their real or perceived affiliation to a race, nation, nationality, ethnic group, real or imagined origin, colour, political beliefs, religion or lack of religion”. The penalty is imprisonment for one to three years. If the act is committed by a member of an extremist group, a public official or with special motives, the penalty is imprisonment for two to five years.

Criminal Defamation of the Head of State

Criminal Defamation of the State and its Symbols

However, it should be noted that Art. 423 of the Slovak Criminal Code prohibits defamation of a “nation, its language or any race or ethnic group” in addition to “a group of persons or an individual due to their real or perceived affiliation to a race, nation, nationality, ethnic group, real or imagined origin, colour, political beliefs, religion or lack of religion”. The penalty is imprisonment for one to three years. If the act is committed by a member of an extremist group, a public official or with special motives, the penalty is imprisonment for two to five years.

Criminal Defamation of the Deceased

The following are official data from Slovakia’s General Prosecution Service for the year 2015 (most recent year available):
• For Art. 373 (defamation), there were 14 cases closed, leading to 9 convictions. These included 1 unconditional prison sentence and 4 suspended prison sentences.
• Under the previous Criminal Code (Art. 206), there were 2 convictions, with one unconditional and one suspended sentence.

The following are official data for the year 2014:
• For Art. 373 (defamation), there were 12 cases closed, leading to 4 convictions, in turn resulting in 1 unconditional prison sentence, 1 suspended prison sentence, 1 criminal fine, and 1 one ceased sentence.
• There were no convictions for defamation (Art. 206) under the previous criminal code. (The current Slovak Criminal Code took effect in 2006).

The following are official data for the year 2013:
• For Art. 373 (defamation), there were 17 cases closed, leading to 7 convictions, in turn resulting in three suspended prison sentences, 3 criminal fines, and 1 type of sentence listed as “other”.
• There was one conviction for defamation (Art. 206) under the previous Slovak Criminal Code.

A recent study by Peter Hanák examined the practical effect of Slovakia’s criminal libel laws on journalists. According to his study, there were no convictions of journalists for defamation between 2010 and 2014. While there were a number of investigations against journalists, in all of the instances either the police or the prosecutor’s office decided to drop the case .

The study notes that the majority of persons who filed criminal reports for defamation were public officials, including three government ministers, numerous judges, including the president of the Supreme Court, policemen and other government officials.

In general, journalists interviewed for the study stated that they did not experience a chilling effect due to the criminal cases, although one did admit to a fear of being jailed (in that case, the person who filed the criminal charges was the president of the Supreme Court). Repeated hearings and “stressful” communications were highlighted as negative experiences.

• In October 2014, prosecutors dropped criminal libel charges against journalist Dušan Karolyi following an outcry from press freedom groups. From a report by the International Press Institute:
“The charges [against Karolyi] related to an August 2013 article published in Trend news magazine in which Karolyi critically examined a court’s decision one month earlier to drop charges against an agent of Slovakia’s organised-crime task force (ÚBOK) for alleged abuse of power while detaining a suspect 12 years ago. Karolyi wrote that the agent had carried out the arrest, made against the owner of a local real-estate company, as if he had captured a mafia boss. In the article, the case was used to highlight the Slovak business community’s frustration with perceived judicial corruption and law-enforcement failures in the country. Although Karolyi identified the agent only by his first name and last initial, the agent filed criminal libel charges. Had Karolyi been tried and convicted, he would have reportedly faced up to five years in prison.”

• In September 2016, prosecutors questioned two journalists with the weekly magazine Trend, Zuzana Petková and Xénia Makarová, based on a criminal defamation complaint filed by Interior Minister Robert Kaliňák and former transport minister Ján Počiatek. The complaint was in relation to Trend’s coverage of the alleged involvement of politicians in an international VAT fraud scheme. Petková was quoted afterward as saying the prosecutor could not say which statement in the coverage was factually inaccurate .

• In 2014, Ivan Ševčík, an agent with Slovakia’s Office for Fight against Organised Crime (ÚBOK), filed criminal libel charges against freelance journalist Júlia Mikolášiková after Mikolášiková quoted statements made by a court witness. The witness, testifying in a trial related to a housing mafia, stated that Ševčík was aware of the witness’ criminal activity.

In 2011, the civil association VIA IURIS carried out an analysis called “Freedom of expression and actions for the protection of reputation”. At that time, many public officials (such as politicians and judges) frequently sued media outlets for publishing defamatory content that caused damage to their reputation. VIA IURIS observed that courts provided such plaintiffs with excessive protection and awarded them much higher financial compensation than common citizens. National legislation set no limit on financial compensation and no criteria for courts in determining adequate compensation. VIA IURIS pointed out at the time:
“[I]n their decision-making courts often did not take into account principles stipulated by the European Court [including the principle that] public figures must for example tolerate a higher level of criticism, value judgements enjoy a high level of protection, provocative statements, as well as exaggerations are protected, media have right to “excusable error”, etc.”

Among the public officials noted for bringing defamation cases against the media were Róbert Fico, the current Slovak prime minister, and Štefan Harabin, a former justice minister (2006-2009) and later president of the Supreme Court. VIA IURIS estimated that courts awarded Harabin €314,242 in compensation for defamation between 2006 and 2013, and awarded Fico €235,294 between 2007 and 2013. In 2013, Fico decided to conclude all his cases and withdraw all remaining claims.

Since that time, the situation has slowly moved in a positive direction, according to a recent analysis published by IPI in cooperation with VIA IURIS. According to the analysis, Slovak courts now appear to produce better-reasoned decisions and to be more aware of the need to carefully assess the conflict between freedom of expression and personality rights. They also take into greater account the standards anchored in the jurisprudence of the European Court of Human Rights (ECtHR). As a consequence, the protection awarded to public officials against defamation in the media has become less excessive, with less exaggerated financial compensation. Still, much depends on particular judges and courts, so not all decisions contain exemplary reasoning, and some continue to give excessive protection to personality rights.

For the purposes of this research, nearly a dozen civil defamation cases involving the media between 2011 and 2016 indicative of trends were selected and analysed. Compensation awarded in the majority of these cases was €10,000 or below. A significant exception – at nearly five times the next-higest award – is a €99,582 judgment awarded in 2011 by the District Court of Trebišov upon remand by the Regional Court of Košice. The award was made to a businessman who had sued the broadcaster TV Markíza for alleging that the businessman had taken part in bankruptcy fraud.

Read the full analysis “Damages in Civil Defamation Cases in Slovakia”. This entry on civil defamation laws in Slovakia was complied in cooperation with the civil association VIA IURIS.

Information for Slovakia was originally collected by IPI as part of the “Out of Balance” report, published in January 2015 with support from the European Commission and incorporating research contributed by Center for Media, Data and Society at Central European University in Budapest and by the SHARE Foundation in Belgrade. This entry was later expanded and updated by IPI as part of a study commissioned by the Office of the Representative on Freedom of the Media of the Organization for Security and Co-operation in Europe (OSCE).

A fully footnoted version of this entry is available in the OSCE study. This entry was last updated in March 2017.

The information contained in this database is for informational and advocacy purposes only. If you are a journalist facing a defamation claim, you should seek legal advice from a qualified attorney. However, if you are unable to find such an attorney, IPI may be able to assist you in doing so. Please contact us at info(at)ipi.media. 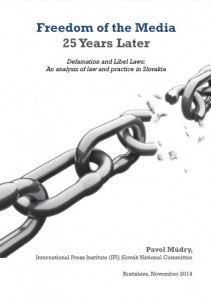