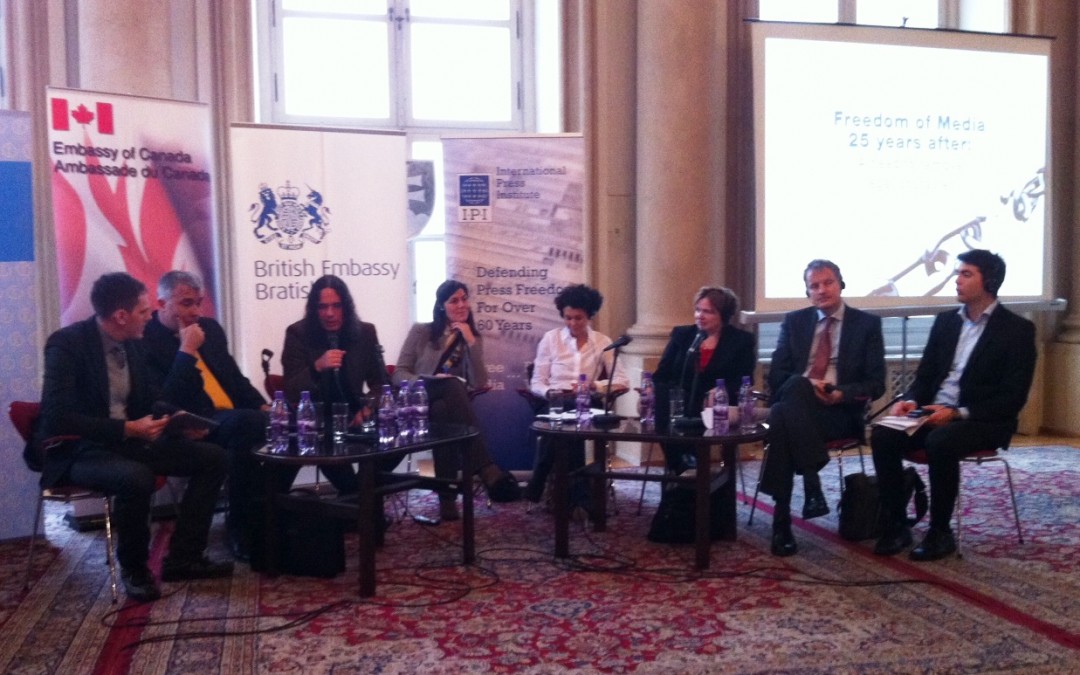 VIENNA, Nov 27, 2014 – A lack of caps on damages has made civil defamation lawsuits in Slovakia a “cash cow” for plaintiffs, attendees were told at a public roundtable discussion on Tuesday organised by the International Press Institute’s (IPI) Slovak National Committee.

Arpad Soltesz, a Slovak journalist who has been a defendant in both criminal and civil defamation cases, told an audience gathered to discuss the state of media freedom 25 years after the Velvet Revolution: “I had nightmares not from [my] criminal case, but from [my] civil case.”

He said that the high compensation levels awarded in Slovak courts was still a “matter of deterrence”, with media likely to practice self-censorship over fear of financial ruin.

IPI – as well as a wide range of other international actors, including the U.N. Human Rights Committee and the Organization for Security and Co-operation in Europe (OSCE)’s media freedom representative – has called for states to decriminalise defamation, pointing to the potential for media self-censorship that may arise from the threat of criminal sanctions.

Slovak Justice Minister Tomáš Borec, who both IPI and its Slovak National Committee had invited, did not attend the event. Instead, attendees heard a recording of an interview in which the press secretary of the Ministry of Justice said that the Ministry did not view criminal defamation laws as a problem and that journalists could not be treated as a privileged group in legal terms. However, the press secretary did appear to acknowledge concerns regarding high compensation levels in civil defamation cases.

IPI Deputy Director Barbara Trionfi, who spoke at the roundtable, said that the conversations at the event “suggest that urgent legislative action is required to ensure that Slovakia’s defamation laws are not abused to limit media freedom.”

She added: “Twenty-five years after the advent of democracy, it is time for Slovakia to remove defamation from the Criminal Code and bring its laws fully in line with international standards on freedom of expression. We also fear that disproportionately high awards in civil cases are contributing to self-censorship in the Slovak media, and we urge the government to introduce caps on damages.”

Slovak journalist Pavol Mudry, who serves as a member of IPI’s Executive Board, pointed to his country’s experience “with totalitarian powers that have used defamation provisions in the Criminal Code tp silence any critical expression by sentencing those critics to jail for years.” He noted that no journalists have been imprisoned in Slovakia in recent years, but he cautioned that “as long as the paragraphs dealing with defamation remain in the books, the danger remains”.

IPI’s Slovak National Committee together with the Slovak non-profit legal watchdog group VIA IURIS provided critical background information for attendees in the form of a new analysis of the country’s court practices in defamation cases. While the report noted several strong decisions drawing on European Court of Human Rights jurisprudence, it suggested that “courts continue to award inappropriately high compensations for non-pecuniary damages to public officials or public figures, often with confused, inadequate and even bizarre reasoning”.

The report further expressed concern over an apparent trend whereby Slovak judges have responded to criticism of their rulings or their general conduct by filing defamation suits, a concern shared by IPI’s Slovak National Committee. Mudry observed that cases in which judges sue media outlets or journalists are heard by colleagues of those same judges, creating, “in the view of IPI Slovakia, a clear conflict of interest”.

VIA IURIS’ analysis pointed to what it called a “protectionist tendency” among judges presiding over defamation cases in which another judge is the plaintiff. The group cautioned that judges hearing those cases “ought to bear in mind the alarming state of public perception of the judiciary in Slovakia”.

Soltesz and Trionfi were joined in the discussion by IPI’s Scott Griffen, who is leading an IPI project to study defamation and insult laws across EU member and candidate states, raise awareness of those provisions among journalists and lawyers, and push lawmakers across the continent to make needed reforms.

Other panellists included Andrey Rikhter, director of the Office of the OSCE Representative on Freedom of the Media; Rosalind McInnes, principal solicitor at the BBC Scotland; Vibeke Borberg, head of research in media law at the Danish School of Media and Journalism; Miroslav Kollár, executive director of the Institute for Public Affairs (Slovakia); and Jozef Vozár, a media lawyer and member of the Slovak Council of Judges.