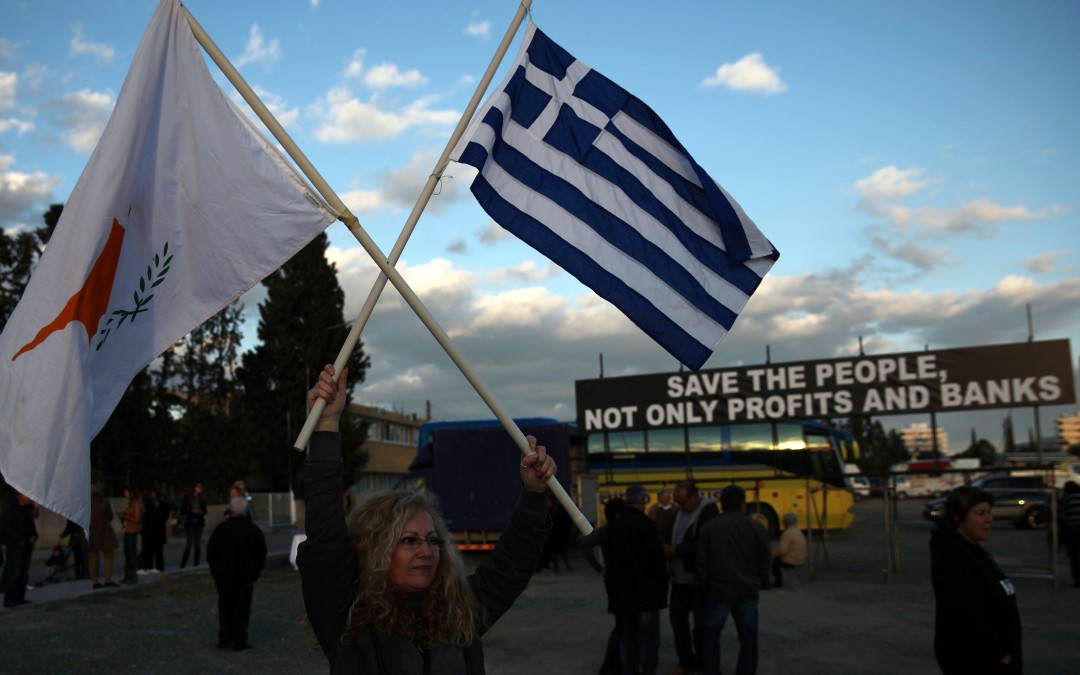 A woman holds a Greek and a Cypriot flag during an anti-austerity demonstration outside a conference hall holding the European Central Bank (ECB) Governing Council meeting in Nicosia March 4, 2015. REUTERS/Yiannis Kourtoglou

A court in Athens on March 30 found Vaxevanis guilty of criminally defaming well-known Greek businessman Andreas Vgenopoulos. According to reports, the charges related to the April 2013 edition of Vaxevanis’s investigative journalism magazine, HotDoc, which described Vgenopoulos’s alleged role in the 2012-2013 Cyprus financial crisis. That edition’s cover image depicted Vgenopoulos in the foreground, smoking a cigar, while a Euro symbol emblazoned with the Cypriot flag sinks into the sea behind him.

The court has suspended Vaxevanis’s prison sentence for three years. Generally, a suspended prison sentence is carried out only then if a defendant is convicted of another offence during the suspension period. Vaxevanis reportedly faces legal action in 42 further cases. In 2013, he was notably acquitted of breaking privacy law over HotDoc’s publication one year prior of a list of suspected tax evaders.

Reports indicated that Vaxevanis sought to defend the story on Vgenopoulos using official Cypriot government documents. In a statement quoted in the press, Vaxevanis assailed the verdict and criticised the Greek justice system for allegedly failing to take into account the results of relevant investigations in Cyprus. Vaxevanis added that he would appeal, including up to the European level.

The European Court of Human Rights (ECHR) has on numerous occasions ruled that the imposition of a prison offence in a libel case constitutes a violation of freedom of expression under Article 10 of the European Convention on Human Rights, dating back to its landmark 2004 decision in Cumpănă and Mazăre v. Romania.

Significantly, the ECHR has clarified that a sentence of imprisonment is unacceptable independently of whether the finding of liability itself was justified. In 2013, for example, the Court ruled that Greece had violated Art. 10 after Greek courts handed a local politician an eight-year (later seven) suspended prison sentence for libelling the mayor of Nigrita. In that case, Mika v. Greece, the Court, while appearing to suggest that the politician’s conviction could be defended as such, concluded that the punishment was disproportionate and “has the capacity to provoke a chilling effect on debates of public interest […]”.

IPI Director of Press Freedom Programmes Scott Griffen described the court’s decision in Vaxevanis’s case as “difficult to understand” in light of Mika and similar recent rulings by the ECHR.

“We are deeply concerned by the conviction and sentencing of Mr. Vaxevanis, which fly in the face of European norms and values surrounding freedom of the press,” Griffen said. “The use of criminal law to resolve libel claims – and especially the imposition of a prison sentence – is unnecessary, disproportionate and prone to abuse. In addition to urging that this ruling be promptly reconsidered on appeal, we call on Greek legislators to reform Greece’s outdated libel laws in particular through the repeal of all related criminal provisions.”

SEEMO Secretary General Oliver Vujovic added: “It is critical that Greece, as the home of democracy and an EU country, recognise the danger for investigative journalism and the free flow of information such rulings harbour. We urge Greece to seize this opportunity to undertake urgently needed reform of its defamation legislation.”

When treated as a criminal offence, defamation is punishable in Greece with up to two years in prison, according to IPI’s comprehensive research into EU libel law contained in its 2014 “Out of Balance” report. IPI’s research also suggests that Greece and Italy are the only EU states where prison sentences are still handed down to journalists in practice, although 20 out of the 28 member states maintain the possibility of doing so. Italy’s Senate is currently considering a bill to abolish imprisonment as a punishment in criminal defamation cases.

In addition to the ECHR, both the U.N. Human Rights Committee, which is responsible for overseeing compliance with the International Covenant on Civil and Political Rights, and the special rapporteurs on free expression of the U.N., Organization for Security and Co-operation in Europe, and the Organization of American States have stated that imprisonment is not an appropriate punishment for defamation.