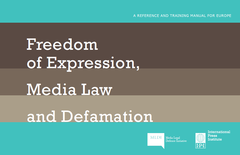 IPI and MLDI have joined together to publish a comprehensive reference and training manual for lawyers and journalists on European legal standards related to freedom of expression and the protection of reputation.

The 55-page manual, “Freedom of Expression, Media Law and Defamation,” summarises key principles of European jurisprudence on defamation and is intended to provide support to lawyers representing media practitioners who have been sued or charged with libel, while also helping journalists to understand their rights under international and European human rights mechanisms.

The manual is accompanied by a set of training materials that allow for qualified trainers to prepare and carry out workshops on defamation law and freedom of expression in European countries. In addition to transmitting essential knowledge, the workshops provide an opportunity for participants to actively practice working through litigation strategies using case studies and moot court scenarios.

“The purpose of this guide and accompanying training materials is two-fold,” IPI Director of Press Freedom Programmes Scott Griffen explained. “On the one hand, they offer European lawyers essential knowledge for developing litigation strategies based on European human-rights standards to defend media clients targeted in defamation proceedings. On the other, they seek to inform European journalists about the full extent of their right to cover and comment on matters of public interest, which may not be adequately recognised by courts and legislation in their own countries.”

MLDI Legal Director Nani Jansen added: “The European Court of Human Rights in Strasbourg has developed a detailed set of standards governing how national courts should settle defamation claims. These standards provide significant protection to journalists and apply across Europe. To successfully defend journalists, lawyers need to be able to incorporate them with arguments based on national law. This manual allows them to do exactly that and should lead to the successful defence of more journalists.”

Chapters covered by the manual and training materials include:

· Underlying sources and principles of freedom of expression

· A conceptual introduction to defamation (including history, the right to reputation in law and types of responses to defamatory content)

· Types of defamatory material (including opinions vs. facts, humour and statements of others)

· Defamation and public debate (including protection of political speech, privacy of public figures, the “public watchdog” function and religious defamation)

· Defamation case law of the European Court of Human Rights

In late 2014 and early 2015, IPI and MLDI held an initial series of workshops based on a draft version of the manual in the Republic of Macedonia / Former Yugoslav Republic of Macedonia, Croatia, Spain and Portugal. This series allowed for the manual to be tested in practice and improved following feedback from participants and trainers.

Each workshop was led by a leading legal expert and participants included lawyers, journalists and representatives of civil society. In addition to the material covered by the manual, the workshops also included a session on respective national defamation law as well as an editorial training session that provided journalists with practical reporting tips for balancing respect for reputation with the public’s right to know.

While Europe as a whole is considered to be among the world’s more progressive regions with regard to freedom of expression, the abuse of defamation laws remains a significant obstacle for European media. The manual and training materials form part of an effort by both IPI and MLDI to counter this obstacle by providing skills, resources and knowledge to European lawyers and journalists.

MLDI works extensively with lawyers in several European countries to defend cases against the media, including by taking cases to the European Court of Human Rights – the court of last resort for all European journalists who allege violations of their right to free expression set forth in the European Convention on Human Rights.

IPI’s work on defamation laws in Europe includes a research and advocacy programme aimed at encouraging the adoption of defamation laws in line with human rights principles. Last summer, IPI’s report “Out of Balance” revealed that the majority of defamation legislation in EU countries falls “dramatically short” of fulfilling relevant international standards.

The manual and materials were commissioned from Dr. Richard Carver of Oxford Brookes University.