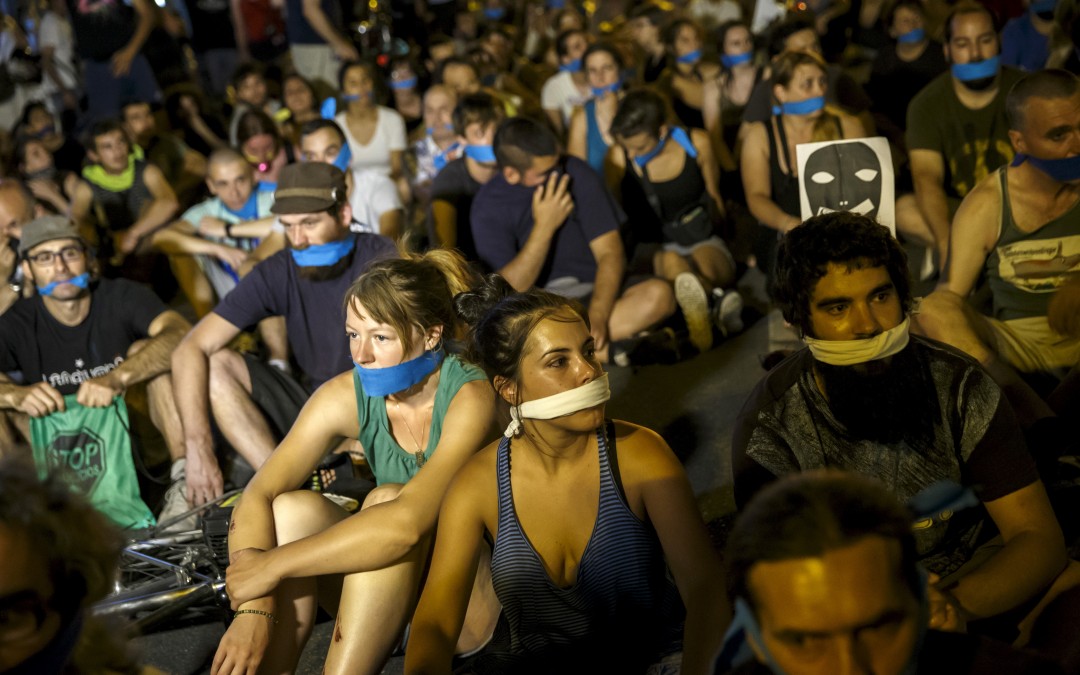 Demonstrators with their mouths taped sit outside the Spanish parliament during a protest against Spanish government’s new security law, popularly known as “Gag Law”, which came into effect July 1. In Madrid, Spain, July 1, 2015. REUTERS/Juan Medina

The intiative, made public on Dec. 15 and which emerged from the intiative of a coalition of civil liberties groups, seeks “an ECtHR ruling regarding the violation to freedom of expression that the gag law entails,” according to Anaïs Franquesa, lawyer for Defender a Quien Defiende (“Defending those who Defend”).

In concrete terms, the claim focuses on the ambiguous wording of Art. 36.23 of the law, which foresees administrative sanctions (up to €30,000) against the “the unauthorised use of images or personal or professional of [public security officers] that could endanger the personal or family safety of the officers or that put at risk the success of an operation”.

According to Franquesa, the wording of the law is so “broad that it is not clear if by ‘usage’ what is meant is the taking, reproducing or later publishing. Moreover, with respect to “unauthorised’ it is not clear who is meant to authorise the use of image and at what point in time”. In this sense, she said, the law violates Arts. 10 and 13 of the European Convention on Human Rights, a treaty to which Spain is a party.

This ambiguity in the drafting of the law means that “there exists the risk that authorities may apply the law in an arbitrary manner, leading to a chilling effect on journalists in the moment of covering protests or other events,” stated International Press Institute (IPI) Director of Press Freedom Programmes Scott Griffen.

IPI has previously criticised the fact that the vague nature of the law and its susceptibility to multiple interpretations could lead to self-censorship among journalists. In a recent high-level international mission to Spain, IPI, together with the Platform in Defence of Freedom of Expression (PDLI) and two other international organisations, urged the government to repeal the public security law in order to safeguard the free flow of information in the country.

Yolanda Quintana, PDLI secretary general, added: “The claim brought by three Spanish media outlets against the ‘gag law’ aims to highlight, on the one hand, the effective ability of the state, as seen in the wording of this law, to censor the press on reporting related to political topics. We were given assurances that the law would be applied ‘taking into account freedom of expression’ but we already see that is not the case. On the other, the claim seeks to serve as a reminder that it is judges, not any political or administrative bodies, who should adjudicate conflicts in a case in which fundamental rights are said to be in conflict.”

“Once again, we ask the authorities and the next government to repeal the public security law and restore independence to the Spanish public broadcaster, in both cases so as to guarantee freedom of press and information in Spain,” Griffen concluded.

Spain: Press Freedom in a Time of Change (IPI and partners, November 2015)

Limits and Threats to the Exercise of Freedom of Expression and Information (PDLI, March 2015