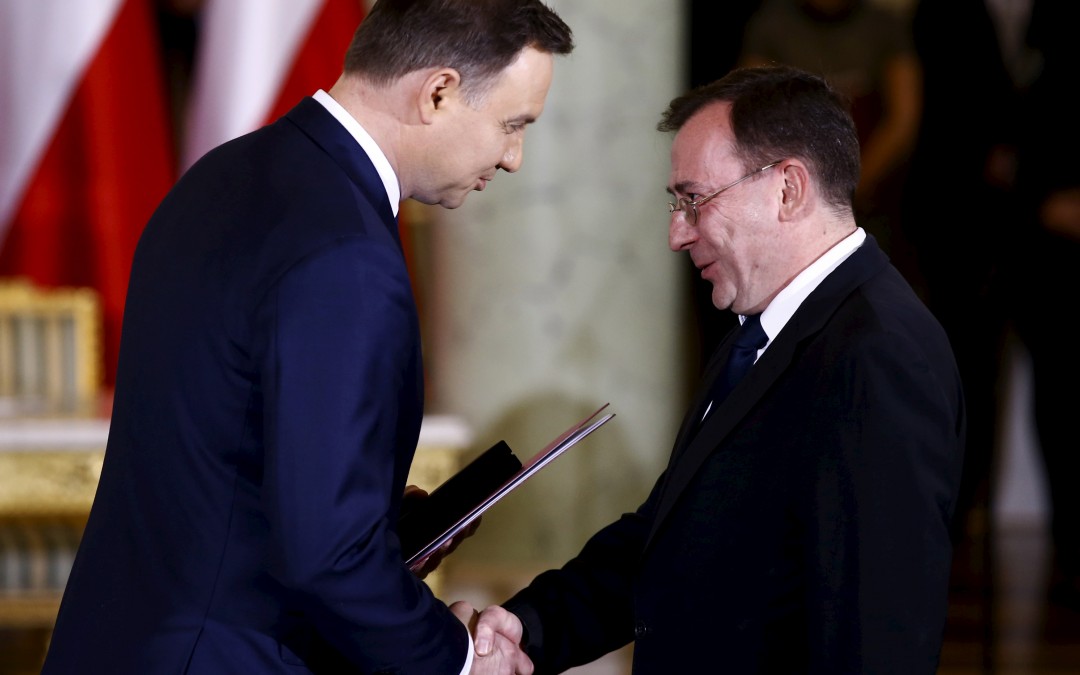 In a commentary piece published in Gazeta Wyborcza on Nov. 17, 2015, journalist Wojciech Czuchnowski took sharp issue with the pardon, announced the same day, describing it as an “anarchic gesture” and as reflective of the operations of a “mafia state”. Czuchnowski suggested that the President’s move was part of a concerted effort by PiS to exert pressure and even intimidate the judiciary. The piece appeared on the paper’s front page alongside separate news coverage of the pardon.

Duda, who has no party affiliation by virtue of his office but who was PiS’ candidate in last May’s presidential vote, had stirred controversy by pardoning Mariusz Kaminski, who served as the head of Poland’s Central Anti-Corruption Bureau from 2005 to 2009 and was named to the post by a previous PiS government. In March 2015, a Polish court sentenced Kaminski to three years in prison for abuse of power following a multi-year legal wrangle.

Notably, Duda issued the pardon before Kaminski had exhausted the appeals process – a point that Czuchnowski criticised in his opinion piece.

Gazeta Wyborcza said earlier this week that lawyers for PiS had filed a libel claim against it in response to the commentary piece. According to the paper, the party is seeking an apology from Czuchnowski and from Agora S.A., Gazeta Wyborcza’s publishing company. Reports indicate the apology would be required to be printed on Gazeta Wyborcza’s front page as well as on the paper’s website, in addition to a hard copy in the form of a letter sent to PiS headquarters.

PiS’ complaint is said to object specifically to Czuchnowski’s “mafia state” characterisation. That comment, the complaint reportedly alleges, unlawfully harmed PiS’ good name and exposed it to a “loss of public confidence”.

IPI Director of Press Freedom Programmes Scott Griffen said IPI was “extremely troubled” by the party’s decision to use libel law to attack its political critics in the media.

“This lawsuit constitutes a misuse of libel law and represents a direct attack on press freedom and freedom of expression in Poland,” he said. “Mr. Czuchnowski’s article was clearly labelled as an opinion piece and it proceeded to express a viewpoint on a matter of political nature that is unquestionably in the public interest. There is almost no room in such circumstances for a libel claim, let alone one lodged by the governing party itself. Scrutinising, criticising and provoking debate on actions of the government is a fundamental job of the media without which democratic society could not survive.”

Griffen pointed out that long-standing jurisprudence of the European Court of Human Rights has accorded the “highest importance to freedom of expression in the context of political debate” and that the Court has ruled that the limits of acceptable criticism are wider as regards the government and politicians. Moreover, the Court has also stated that a politician “knowingly lays himself open to close scrutiny” and that even criticism that “shocks, offends or disturbs” is permissible.

“Although the redress requested in the case – an apology – may appear low, the symbolic power, as well as the potential to chill future criticism of the government, is high,” Griffen added. “We urge PiS to drop this suit and to refrain from launching similar actions in the future.”

Since winning a parliamentary majority in October 2015 elections, PiS has weathered a storm of international criticism and protests across Poland for measures seen by critics as weakening democratic institutions. These measures have included an amendment to the country’s Media Law allowing the Minister of State Treasury to directly appoint – and fire – board members of Poland’s public service broadcaster. Following a joint fact-finding visit to Warsaw last week, IPI, the European Federation of Journalists (EFJ) and the European Centre for Press and Media Freedom (ECPMF) issued a joint statement urging the Polish government to respect international standards on the independence of public service broadcasting.

IPI has closely researched the use of defamation laws to silence criticism in Europe, beginning with the release of its “Out of Balance” report in January 2015 and including the launch of its Media Laws Database last year. In addition to criminal defamation laws, civil lawsuits launched by public figures or that claim disproportionate damage awards remain significant areas of concern.