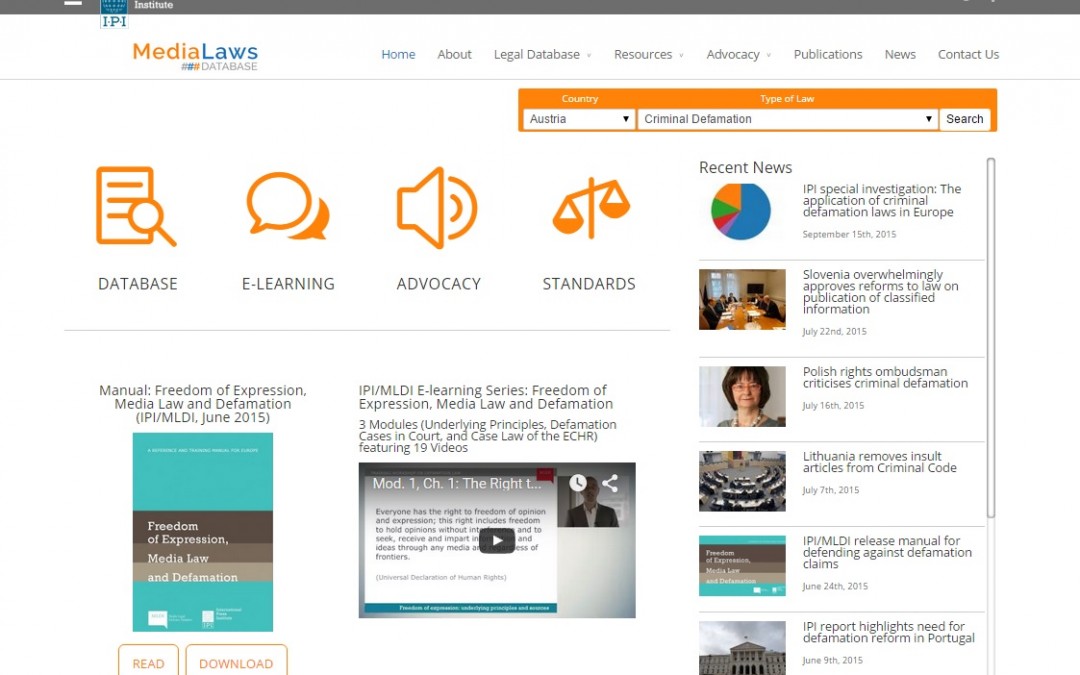 The initial roll-out of the database features detailed information on defamation laws, parsed into 12 searchable categories, for countries in the European Union and the Caribbean, building on IPI’s ongoing research, advocacy and training work on the topic in both regions.

IPI Director of Press Freedom Programmes Scott Griffen said the database aimed in part to expose the failure of states, including a majority in Europe, to incorporate international standards on freedom of expression in law.

“The past years and decades have seen the development, on the part of international human rights bodies and courts, of clear and important standards when it comes to respecting freedom of expression. But our research shows that governments, including in Europe, which is generally considered to be a safe haven for free expression, have largely failed to adopt these standards in legislation,” Griffen said.

He continued: “In practice, this means that laws that disproportionately restrict freedom of expression, such as criminal defamation laws, not only still exist, but are also still applied against journalists and others. In the case of Europe, it also makes pushing for change in countries elsewhere more challenging. This database, in offering a clear and consolidated source on legislation in effect on a country-by-country basis, seeks to raise awareness about the gap between international standards and the reality on the ground and thereby energise the advocacy needed to close that gap.”

The launch of the database comes just one day after IPI published a special investigation revealing the extensive application of criminal defamation and insult laws in the European Union, particularly in Germany.

While initially focused on defamation laws in Europe and the Caribbean, IPI hopes to expand both the geographic and thematic reaches of the database in cooperation with international and local partners. Research on laws in Europe was conducted in partnership with the Center for Media, Data and Society at the Central European University’s School of Public Policy and with the Share Foundation in Belgrade.

The database also includes resources developed by IPI and the Media Legal Defence Initiative (MLDI) to support lawyers representing media practitioners who have been sued or charged with libel, while also helping journalists to understand their rights under international and European human rights mechanisms.

Key among these resources is an innovative e-learning series developed by IPI and MLDI on freedom of expression and the protection of reputation in Europe, which complements the research and training manual launched by the two organisations in June 2015. The series contains three modules – Underlying Principles, Defamation Cases in Court, and Defamation and the European Court of Human Rights – featuring 19 videos narrated by MLDI experts.

“In order to combat self-censorship, journalists need to be confident in their rights and they need to be trust that lawyers are properly equipped to defend them,” Griffen explained. “Our joint work with MLDI over the past year has focused precisely on these two points, and the publication of these videos seeks to make the material we have developed available to as wide an audience as possible.”

Peter Noorlander, MLDI’s chief executive officer, added that “the growing threat to freedom of expression across Europe means that more lawyers are needed to provide legal defence, and that journalists themselves need to be more aware of their rights. The videos and manuals we developed with IPI are an important training tool and will help build a cadre of lawyers who can defend journalists and bloggers under threat.”

In addition to the database itself, the new site highlights IPI’s ongoing advocacy work, including news and related publications. Since the start of IPI’s campaign to repeal criminal defamation in the Caribbean in 2012, three states, Antigua and Barbuda, Jamaica, and Grenada, have repealed criminal libel, with the former two also replacing 19th-century colonial legislation with a modern civil defamation law. Two further Caribbean countries, the Dominican Republic and Trinidad and Tobago, have improved their criminal libel laws.

Only five EU countries – Cyprus, Estonia, Ireland, Romania and the United Kingdom – have abolished criminal defamation laws. Recent years have witnessed positive legislative changes in Finland, France, Latvia and Lithuania, among others, the latter following a joint IPI/Article 19 mission on May 2015.